Every day you’ll have a chance to participate in airdrops from these 5 projects, starting with Tetan Arena on September 20 and finishing with Faraland on September 24.

Get on Binance Live and learn more about your favorite GameFi projects, including BunnyPark, Thetan Arena, Binary X, DeFi Warrior, and Faraland. Each live session is split into two parts and we will host them in English and Chinese languages.

Grab more than $100k worth of tokens from airdrops powered by CoinMarketCap. Over the next 5 days, you can participate in airdrops from your favorite GameFi projects on Binance Smart Chain.

Thetan Arena is free to play and combines the competitive elements of MOBA (e.g. Dota, League of Legends) and Battle Royale (e.g. Fortnite, PUBG) games. Those are the two mods that players can currently choose and Thetan is actively gathering user feedback to enable the community to choose the next battle mode.

Thetan Arena is a blockchain-based MOBA and BattleRoyale game with many interesting and unique gameplay designs and in-game economics directions. This game is developed by the famous Vietnamese developer WolfFun. They have created two established games on GooglePlay as Editors’ choice, Tank Raid Online, and Heroes’ Strike, with over 10 million downloads. KardiaChain and Wolffun share a vision of a captivating MOBA/Battle Royale game that eliminates most of the commonly seen barriers to create a true “socialising gaming experience” and profitable Play-To-Earn model.

BunnyPark is a DeFi + NFT project deployed on BSC focusing on NFT SaaSization and product standardization that allows the output of NFT development standards, diverse gameplay, product rules, and application values into a series of standard smart contracts. Being the Lego provider in the NFT sector, BunnyPark provides many NFT and GameFi developer teams and artists quick combinations to create NFT product platforms.

BunnyPark owns an independent “SaaS” incubation fund. They are always open to accepting applications from development teams and artists. The successful teams who pass their review can receive fundings, R&D, mathematical models, operations, and other comprehensive support provided by the incubation fund.

DeFi Warrior is a DeFi x NFT Play to Earn blockchain game with a fascinating game story placed in the crypto galaxy. While NFT games are creating a strong trend, DeFi Warrior stands out with the combination of DeFi and NFT in the game, along with the story of the crypto world in miniature.

In DeFi Warrior, each blockchain is a planet, and each crypto is a warrior. The planet is also the place where warriors can build their coin mining factory, and fight against bosses or enemies for rewards. Such game dynamics aim to achieve two essential goals: to bring the world of crypto to the masses through gaming and to pique the curiosity of both gamers and crypto investors.

Faraland is a turn-based strategy & RPG. In the game, you can use your NFTs as heroes and compete with other players by learning powerful skills, collecting rare equipment, recruiting troops, exploring the map, capturing resources, and joining battles. All heroes have mutually exclusive attributes, and after each battle, they earn experience, such that veteran heroes are significantly more powerful than inexperienced ones.

Faraland is inspired by the storyline, battle system & character system of the Warcraft series, the Final Fantasy series, the Pokemon series, or Horizon Zero Dawn, where players have more freedom to explore the world and interact with each other. They can also participate in War battles where they join forces with other players.

BinaryX is a brand new Decentralized Derivatives Protocol on BSC built by an international team, with senior experts both inside and outside the blockchain industry. On August 20, 2021, BinaryX officially announced the launch of the Cyber Dragon online game, merging blockchain gaming with DeFi functionality. The game currently has more than 120,000 cumulative user card draws, and the number of gold coin circulation has reached 1 billion. Its circular currency system of governance tokens and game tokens forms a closed loop of token economy in terms of economic model and gameplay economy.

BinaryX is committed to becoming the largest derivatives trading platform in the BSC ecosystem, and provides derivatives scenarios for project partners in the ecosystem, so as to help projects reach users in multiple levels and patterns. 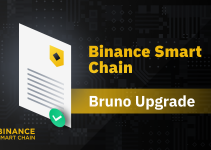